Kaleidoscope, Strange Horizons, Outer Alliance, and some other things

I recently went out to

nineweaving's book launch party, and then to

asakiyume's house, and I was reminded that quite several people I know and like use LJ, even though I seem to have stopped. Hello, friends!

I don't expect I'll be posting very often here, but I wanted to give a general life update all the same. Here are some things I've been busy with lately: 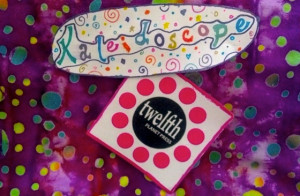 1) Kaleidoscope: This is a YA anthology of contemporary fantasy stories with diverse protagonists. I'm co-editing it with Alisa Krasnostein of Twelfth Planet Press (an Australian small press that publishes some great books). Right now we're in the middle of a fundraising campaign, which is seriously one of the most nail-biting, nerve-wracking things ever. I had heard this from others who'd done crowdsourced stuff like Kickstarters and so forth, and I thought I understood, but I realize now I never truly did. There's a special kind of horrible nervousness that comes with hoping that fundraiser will inch upwards to the fully funded mark. Will we get to make the project? Is all our work going to have been for naught? *bites nails* I hear we're doing well at about 1/3 of the way to the funding goal, but I can just tell I won't rest easy until we get all they way there. If you want to learn more about the project, take a look the Pozible page. You can back it if you'd like to help ease my fragile nerves. You could also share that link with your friends and followers and whatnot if you think the project is worth sharing. Either of those things would make me happy!

2) Strange Horizons: I'm still editing short fiction for Strange Horizons, and it's pretty wonderful, but also takes a lot of energy. We had the great honor of being nominated for a Hugo award this year, which meant I got to go to WorldCon and collect a shiny rocketship pin. I was very happy to be able to attend the awards ceremony along with Jed Hartman, who worked on Strange Horizons for 12 years, and with Mary Anne Mohanraj, who started the magazine to begin with. I also got to meet an astronaut. Coolest thing ever! She was intrigued by my animatronic cat purse. Because I am the kind of person who carries an animatronic cat purse to a formal awards event. Yes. I also got to hang out with other nominees like

michaeldthomas, and Howard Tayler even let me hold his Hugo, which was very cool. And also very heavy. After WorldCon, we had the annual Strange Horizons fund drive, which hit its target--yay! Now we'll have artwork with one story per month starting in January! This is very exciting. If you want to read the magazine, you can do that here. 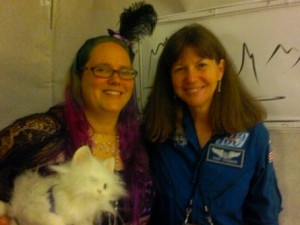 Here I am at the Hugo Losers Party with my
animatronic cat purse, and Cady Coleman,
who is wearing her uniform!

3) Podcasting: I'm still hosting the Outer Alliance Podcast, so if you'd like a monthly dose of QUILTBAG SF chat, there it is. These days I'm also a regular on The Skiffy and Fanty Show. I'm usually on the Torture Cinema episodes (where we talk about bad movies), but I sometimes also participate in other episodes with interviews or discussions, too. The Skiffy and Fanty Show also recently started having a much more active blog, so I have a weekly column on Fridays called This Katamari. I basically round up a few things I'm thinking about and talk about them a little bit. It's mostly silly and fun. I've also been narrating the occasional story for PodCastle and Pseudopod, and poems for the Strange Horizons Podcast. So, that's me and podcasts!

4) Family stuff: I have a nephew who just turned one-year-old! His birthday party was last week, and he proved to be a total anomaly in our family by NOT LIKING CAKE. Yeah, I have no idea how that happened. Meanwhile, my mother has become quite the quilter in the last couple of years. In addition to two throw quilts Moss and I use to keep our laps warm while watching movies, she's sent us a few potholders, a small table runner, and most lately, some Halloween themed pillowcases. Here they are: 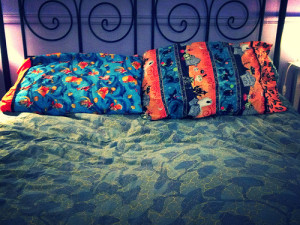 So, I think that's a pretty good general update. I've also been very social lately with multiple parties, book launches, dinners with friends, etc. All of this conspires to keep me offline except for work most of the time, but I still think about you guys! How are you? What's been up in your life recently?
Subscribe